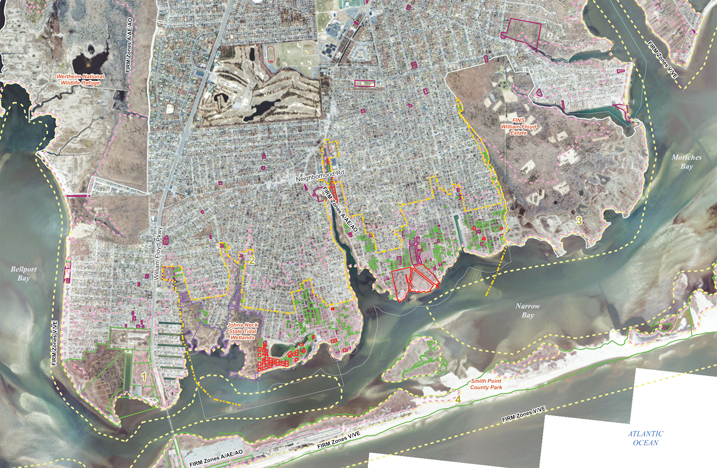 Nearly four years of long and careful consideration’s, Suffolk County officials have voted to move forward with a plan to acquire land in Mastic Beach. The counties resolution involves a list of 58 parcels in the Mastics and Shirley area slated for conservation.

In 2012 Suffolk Executive Steve Bellone and Legislator Kate Browning had also sent a joint letter urging the Housing and Urban Development secretary to expedite funds for the open-space preservation.

“In places like Mastic Beach, we should take this opportunity to reverse mistakes made decades ago, which allowed homes to be built in places that are increasingly vulnerable to flooding,” said Bellone.

In 1997 FEMA and SEMO Hurricane Hazard Mitigation Grants had funded a Suffolk County report called the Narrow Bay Floodplain Protection and Hazard Mitigation Plan which warned us about the impact of low-lying Mastic Beach. The Plan had recommendations to purchase the environmentally sensitive wetlands along the coast.

“Suffolk County is decades ahead of the problem,” said Browning.

Over the years, Suffolk County has worked hard on acquiring many of the small parcels of land in the Mastics and Shirley Conservation Area, but the effort has been running into troubles recently. Open-Space funding has since been dwindling, making it harder for the county to purchase from willing owners.

“By addressing this problem with proactive solutions now, we hope to protect, or at least diminish, property owners from the destruction of future storms,” said Mastic Beach Mayor Maura Spery.

According to Spery, “This is a voluntary program for people who don’t want to pay taxes and own property in a known flood zone. They’ve had it.”

The current funding for the purchases are coming from grant money that the county applied for back in 2014. The Grant is through the NRCS for the counties Emergency Watershed Protection Program, where it hopes to aid in the acquisition of flood-prone properties that were damaged during hurricanes. The grant was approved in September of 2015.

The county has been at work to appraise each property with hopes of acquiring it. So far there is a total of 58 parcels being appraised, down from 62, with only two or three of them having actual structures located on them.

“There’s no guarantee that we will purchase all 58 properties,” Slaughter, trying to stay optimistic has said. Since they are only offers, the County cannot make any promises of purchasing the land.

The process has been a sluggish one, with the Federal Government making sure that the “town and counties policies were in line with theirs”

“We are working hard to reverse the poor planning of the past, and thanks to the availability of these federal monies, we are acquiring 39 acres at no cost to local taxpayers,” spery has said

You can read about this from the County’s website (PDF)