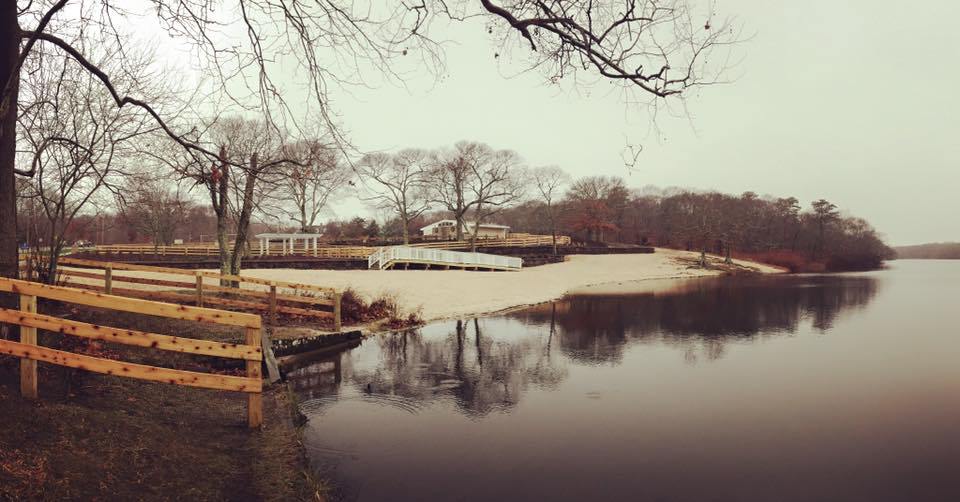 Kaler Pond, once a grist mill turned park has had little changes since it was donated over several decades ago. This year marks a change in that as the Town of Brookhaven has completed a $500,000 renovation that clears views from Montauk Highway, adds handicap accessibility, replaces intrusive vegetation with native ones and fixes storm water run off.

Over the years, neglect by officials and the town’s Park Department has left the park looging ragged and in desperate need of repairs. The park’s steep hill had caused storm-water runoff to flow right into the pond from Montauk Highway. However the new park renovation helps fix this by featuring improved drainage by installing retaining walls, porous pavers, and a rain garden which features native plants. The town also added handiapped-accessible paths that lead to the beach in the park, as well as new cedar fencing that will turn into a rustic grey over time.

Today the park stil features its original TWA Flight 800 memorial and a plaque dedicated to World Record maker David Romeo, who caught a 3,001 largemouth bass in 1984

Brookhaven Town officials had closed the park for a month while town parks workers and local contractors had worked on it. According to Councilman Dan Panico this is the first time the park had been rebuilt in decades.

Mill Pond is well stocked with trout by the states Department of Environmental Conservation and has been the site of a world record set by David Romeo in 1984. Romeo had caught a 3,001 largemouth bass.

Next year the town plans to improve the parking lot and the Flight 800 memorial park, and add a launch ramp for kayaks and small boats.

The park was once the site of a old grist mill decades ago but was donated to the town by the owners, the Kaler family.