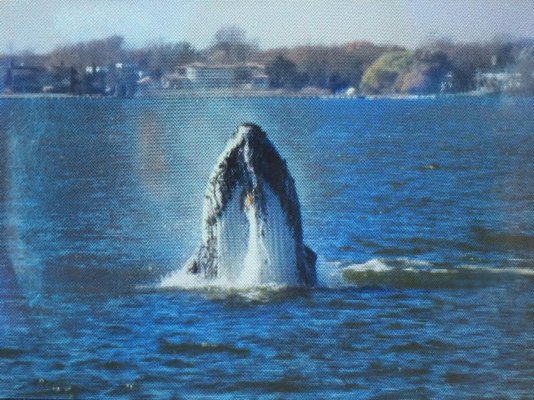 What’s a rare sight for Long Islanders? If you answered a humpback whale then you would be correct. This week just that had happen! Reports of a humpback whale being spotted have been popping up on the internet this week as a whale made its way into the Moriches Bay in search of bunker fish.

The rescue director for the Riverhead Foundation, Kimberly Durham, is monitoring the whale and has estimated it to measure anywhere between 25 to 30 feet in length. She was made aware of the whale when numerous people reported the whale splashing around the bay.

“We’re really trying to get absolute confirmation animal is eating,” said Ms. Durham.
“There is absolutely nothing right now that indicates this animal is in distress,” she continued.

The report she gave came from a ride on a Coast Guard boat based in East Moriches where she had monitored the whale, she determined it was just feeding.

Ms. Durham had stressed that onlookers should refrain from going into the water to get close to the whale, as it is very active and could be dangerous to people.

While it’s unusual for humpback whales to go into shallow water, it will usually follow its food source, in this case that’d be bunker fish. “It’s unusual, You will never hear me say, ‘Oh it’s just another whale in the Moriches Bay” Ms. Durham is quoted saying.