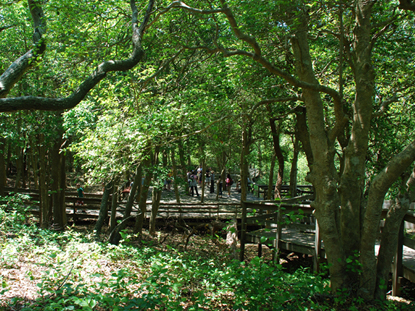 The entire County of Suffolk has been declared an “oak wilt protective zone” by the state. The removal from Suffolk of any portion of any oak is generally prohibited and the removal of all firewood from Suffolk is regulated.

The State Department of Environmental Conservation made the announcement yesterday. Oak wilt protective zones have been established in the Brooklyn neighborhood of Greenwood Heights, in the upstate Town of Canandaigua and in all of Suffolk.

The oak wilt fungus can spread from one oak to another even after the infected tree has died, according to the state agency. Moving potentially infected oak firewood, logs, and branch debris contributes to the spread of the disease, DEC said.

“To prevent this, the oak wilt protective zones prohibit the removal of any living, dead, standing, cut, or fallen oak trees or any portion thereof, including branches, logs, stumps, or roots, green oak lumber, and firewood (of any species) out of the protective zone unless it has been chipped to less than one inch in two dimensions,” the DEC said in the release.

“Firewood, no matter the species, is a regulated material because it is difficult to distinguish oak from other species when cut into small pieces. Non-oak wood leaving the protective zone must be 29 inches in length or greater,” the DEC said. “In special circumstances, DEC will allow the movement of unchipped oak wood from a protective zone through a special permit issued by DEC’s Division of Lands and Forests.”

Oak wilt has killed tens of thousands of trees across the country, resulting in hundreds of millions of dollars in damages and economic loss, DEC Commissioner Basil Seggos said. “New York is working strategically to prevent such devastating losses of oak trees in our state where oak is a widespread and valuable hardwood,” he said.

The agency is monitoring infection sites for signs that oak wilt has spread. Testing for oak wilt must be conducted during the growing season when the fungus is active. Intensive sampling will begin this summer in June. Aerial surveys will begin in July when signs of oak wilt will be most apparent.

In addition to establishing the protective zones, management activities may include removing and destroying infected trees, removing surrounding un-infected oaks to create a buffer, trenching to sever root connections between oaks, and treating infected stumps to kill the roots, the DEC said.

Oak wilt is caused by the fungus Ceratocystis fagacearum. The fungus grows in the water-conducting vessels of host trees, plugging up these vessels and preventing water transport. As water movement within the tree is slowed, the leaves wilt and drop off, often killing the tree rapidly.

DEC asks the public to be on the lookout this summer for oak trees that suddenly lose their leaves during the months of July or August. These occurrences should be reported to DEC’s Forest Health Information Line toll-free at 1-866-640-0652 or via email foresthealth@dec.ny.gov. Submitting pictures of oaks showing symptoms of oak wilt is encouraged.

IT STANDS like a sentry on watch, a solitary figure...
DEC