It was back in 1812 that “Uncle Billy Dayton” set the first white pine seedlings on his farm in Middle Island on the road to Yaphank. As the years passed, the trees grew and seeded themselves over the land that surrounded the first planting, until they covered nearly 15 acres, and became the most beautiful white pine forest on Long Island. As one walks through the quiet solitude of these Cathedral Pines, on a soft carpet of pine needles, and gazes up into their lofty heights, the rush of our modern world seems far away. 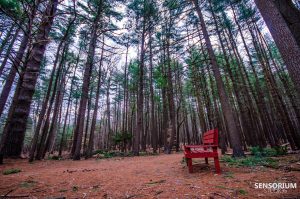 Prosser Pines. A unique and rare forest that sit’s right off Yaphank-Middle Island Rd is one of the oldest surviving White Pine Plantations to exist on the eastern seaboard of the United States. Originally started by British officer Jonathan Edwards, whom was awarded 300 acres in Middle Island. Edwards had traveled to Middle Island with the pine seedlings from Quebec. When Edwards arrived, he had used the seedlings on the road to Yaphank, eventually the pines area had continued to grow eventually creating a small forest on his farm.

According to a map made by the late Richard M. Bayles, in 1797 a Zachariah Hawkins had sold James Dayton some farm land, which had included where the growing pine grove was situated. William Dayton, son of James Dayton, had planted a few more of the white pine tree’s when he was 18 years old. When James Dayton passed, William and his brother James had become the owners of the 240 acre farm.
Later on, when the two brothers passed away, they had willed the land to their nephew John R. Dayton. John eventually sold the 240 acre’s to Thomas Prosser in 1889. 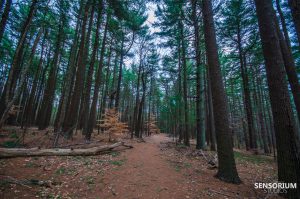 By the time the Prosser family took ownership of the grove, the tree’s had matured and are said to be at least 90 feet tall. Thomas Prosser and his wife had took great pride in keeping the forest in first class condition. Prosser had build a road that circled the forest and allowed the public to enjoy the forest, until careless people had left trash. Eventually conditions had got so bad, that the Prosser’s had c

losed off the forest to the public. The only members of public that were allowed were groups of school children and their teachers, which Mrs Prosser had invited until she passed away in 1966.

Eventually Suffolk County purchased the land in 1967, and dedicated the preserve as the Prosser Pines Nature Preserve for future generations to enjoy.

Across the road runs the Carman’s River, which in early life of settlers, helped power their grist and saw mills. On the west side of the river lies Cathedral Pines, which was once Camp Wilderness, a thriving Boy Scouts of America Camp that housed over 2,000 scouts on weekends.

“Of Prosser’s dreamy woods I sing,Each tree a harp, each branch a string.The Cadence soft and low is balm,In Prosser’s woods a hallowing calm.

‘Tis God’s cathedral, minister, choir;
The singing pines are harp and lyre;
In Prosser’s woods I voice a prayer,
And worship God and nature there.”
~ Walter Beverly Crane

“The groves were God’s first temples. In the darkling wood, amid the cool and silence, Man knelt down and offered to the Mightiest, solemn thanks and supplication.”
~William Cullen Bryant in 1910